…but some instances are stored as this:

Or, if that is a bit too esoteric, consider any searchable data set where some words may contain accents:

and even this one:

Acknowledgement: The title of this post was stolen from a New Yorker article, published back in 2012: 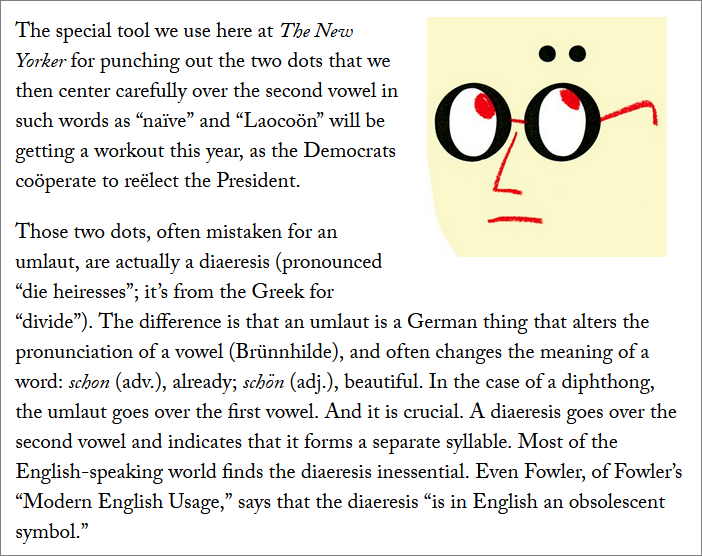 These accents (or more generally, diacritics) can interfere with your search results.

There are also other traps for the unwary:

How can we handle these cases, to help searchers find what they are looking for?

In this scenario, let’s take the word église (French for “church”) as our example. We want a user to be able to enter any one of these words as their search term:

And we want their search to find text which matches any of the the above words. That is, we want our results to contain all occurrences of the word, regardless of whether it starts with e, é, E or É.

Upper/lower case differences are trivial to handle - so we will ignore those, here. But remember to test for these cases.

Before we look at a coding solution to our problem, we have to discuss Unicode normalization and decomposition.

The Unicode standard defines a range of values which represent diacritic marks: 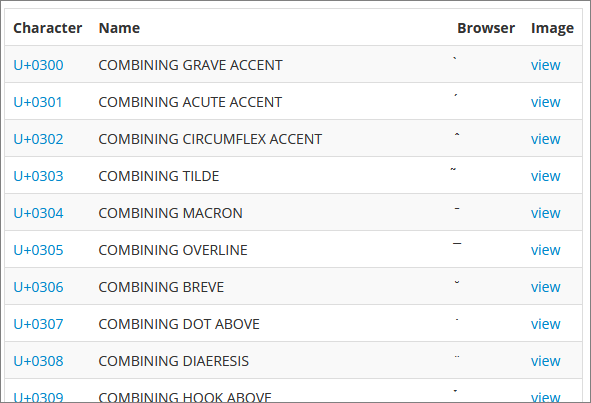 The abbreviation for this class is Mn - which is important because it can be used in regular expressions (see below).

But it can also be decomposed in Unicode into this:

That is, the letter e combined with the acute accent mark.

The process of decomposing a Unicode character results in a Unicode normalized form of that character.

There are four normalization algorithms defined in Unicode.  In summary, they are:

NFC - canonical decomposition followed by canonical composition.  A string will go through NFD transformation, followed by the reverse. Doing this guarantees you won’t be left with any decomposed characters (which may have existed in the original string).

NFKC - compatibility decomposition, followed by canonical composition. So, in this case, the ﬁ character will remain split into the two characters f and i. It will not be recombined.

Handling Our French Church in Java

We can make our search work the way we want by reducing all our text to unaccented letters.  So if the search term is église, we will first transform it to eglise in a two-step process:

Step 1: Java handles text normalization using the java.text.Normalizer class. The normalize method takes an input string and a normalizer (one of the four described above).

Step 2: In Java, we use the regular expression Unicode class p{Mn} to find and remove unwanted diacritic marks.

Now we can take our transformed string and use it as our search term.

This is crying out for a set of unit tests, to verify it does what we want. We might want to trim the string, as well.  It depends on how our search actually works.

We’re still only half way to our solution.

The data we are searching also needs to be brought into line.  Any words which contain diacritics need to go through the same decomposition and removal processes as the search term. Here, however, we don’t want to alter the text in the searchable data - we just want to add to it.

For example, if our searchable data contains the phrase…

…then our searchable data also needs to include the unaccented word “eglise”.  But we need to leave the original phrase intact, for obvious reasons.

Exactly how we implement this depends on our specific scenario.  Are we searching for word tokens, or for full phrases…? Depending on the answer, one approach is to scan all our searchable text, and store all the affected (changed) words in a separate field, not displayed to users:

Simply put: You need to supplement the searchable text to help your users find what they need.

The above code uses NFD as its normalizer, and Mn as the class of Unicode marks to remove. We may prefer to use NFKD (e.g. for ligatures) - and M instead of Mn. The regex p{M} covers three different classes of Unicode marks:

And remember those traps I mentioned at the start of this post? Some of those may need custom handlers, if they are an issue for you.

We may be using client-side searching - e.g. in a tool such as DataTables. There are JavaScript equivalents for the Java processing described above.  An equivalent JavaScript code for my Java example above is this, using the normalize function:

In my case I was not able to use the p{Mn} regular expression in my JavaScript. Perhaps it’s not supported by the regex engine I was using. Or perhaps I was doing it wrong.  Either way, I was able to use the Unicode range.

What I’ve been describing above is somewhat home-made. One line of supporting code, assuming you are implementing search yourself, in your application.

If you’re using a reasonably robust full-text search framework, then it almost certainly already has the ability to do what I’ve been describing - and a whole lot more.

That covers a lot more ground than my one-liner above.

But their basic approach is the same as mine (or, mine is the same as theirs!).  When Lucene builds a full-text index, you specify how the index will handle its data.  For example, should it be indexing text after performing ASCII folding?  And if the answer is “yes” then Lucene needs to use the same ASCII folding transformation on the user’s search terms.

I’ll take a closer look at this in another post.