Another of those things I don’t do often enough to remember:

When accessing a remote server from Windows using PuTTY, I often use SSH authentication using Pageant (as opposed to authenticating using passwords).

I assume we already have the requisite public/private key pair (PEM format), generated on the server we want to access.  Or, in the case of AWS, I assume we captured this info when we provisioned our EC2 server.

This is not an ssh-keygen tutorial.  There are many out there - here’s one. But in a nutshell, the main commands are:

The PuTTY tools use their own format for keys (PPK - putty private key), so we first need to convert our PEM-based public key to a PPK using PuTTYgen:

The shortcut will probably be saved to the desktop. Copy it to the following directory:

Right-click on the shortcut file and choose “Properties”.  The Target property should contain something like this:

Add a space-separated list of paths to your PPK files to the end of the Target command.

For example, assuming there are no spaces in your PPK file names and paths:

The Pageant icon should be visible in the icon tray.  If you double-click the icon, you should see a list of the keys currently loaded into Pageant.

Tell PuTTY to Use Pageant

Use the following setting: 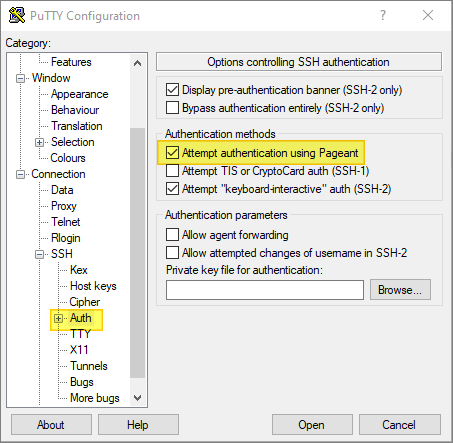 A Note on User IDs for AWS

In PuTTY, go to the Connection > Data > Auto-login username setting.  If you are using an EC2 server, and the image is for EC2-AMI Linux, then the user name is ec2-user. For other flavors of OS it will be different (e.g. ubuntu for Ubuntu).

And finally:  When did you last install PuTTY? Time for an update?